Often on the #yarratrams stream I see people upset at being kicked off the tram short of the terminus for it to turn around. I even have to do just that very thing, however in this post I will attempt to explain the logic behind it, how it should work, and what drivers should be doing to make sure it's explained to their passengers. This move is called a "short shunt".
Throughout a route there are shunts located at various intervals (a shunt is where a tram "turns around" for those who haven't heard of this archaic yet accurate term). For anyone who's seen the Flinders St super stop heading along St Kilda Rd, there is one located on the south side of Flinders St intersection. Anyway, I digress.
A journey from terminus to terminus is supposed to go for a certain period of time. However, owing to real world interference, trams actually run late. We share the roads for a start, and the list goes on, from poor decisions by VicRoads or the Transport Minister, down to the lady with the shopping jeep who can't decide which door suits her disposition better. When a tram runs late, it creates a bit of a snowball and if it runs late enough, it can end up picking up passengers that would otherwise be on the tram behind. And the tram behind, denied the pleasures of regular stopping, often runs early which further causes problems, not just in terms of fines and passenger service, but also for the poor bugger behind him. In short, it can get very messy and quite drawn out. The media refers to this as a "knock on", but for us it's just another shitty day at the office.
For a tram to get short shunted, it must be running a certain amount of time late and this all depends on numerous factors. The tram must be late enough to have used up the journey time from the shunt to the terminus, the recovery time at the terminus, and the return journey time from the terminus to the shunt. If a tram is running this late, they may get a short shunt. If the tram in front got short shunted, they (they being Fleet Control) might get the following to go all the way to keep the service running, even if it's late. Check out the awesome diagram I worked on for about 30 seconds: 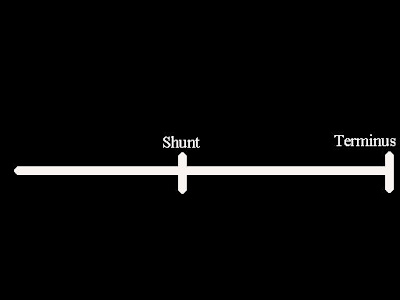 Usually late at night, short shunts are avoided owing to the reduction in services. In a perfect world, when a tram is late, the following tram has caught up and the driver can point this out to the passengers instead of showing them the door.
Some drivers, ever mindful of the clock (in particular their meal break or shift end) will call up and request a short shunt. Personally I wait for them to call me because a) They're paid to monitor the service and b) they know the bigger picture.
Sometimes it can go a bit pear-shaped though. The technology used to monitor trams is so old (yep, it would struggle to run Pacman), that they don't know exactly where you are. Yes, in the 21st century with GPS and anything else post 1981, they can call me up and tell me to shunt when I'm several blocks beyond.


So what should drivers be doing? While it's not always possible, change the destination as early as possible. That way, the two people who actually bother to read them will at least have heads up. This isn't always possible, as the equipment can sometimes be at one end of the tram. Let the passengers know and when you do, try to give them alternatives! Also, let them know if it's just a single tram turning around, or if there's a bigger issue and no services are going through.
I can't emphasise enough that these decisions are made above the driver and while it might be an inconvenience for the passenger trying to get to the end, it is done with the bigger picture in mind. They can let that tram run late all night, creating a nightmare for both drivers and passengers, as well as a mountain of fines, or they can cut their losses and inconvenience the smaller number of people. The greater good. I should also add that fines for short shunting are the second-greatest on the list (the greatest being not running that tram at all, which is what it will feel like for those missing one that's been short shunted). These fines are weighted based on the estimated number of passengers (who says validating is pointless...) traveling, so short shunts during peak hours attract the greater penalties.
Solution?
One solution that's been trialled on various routes at various times is a Block Car. Here's how the magic works:
A tram is running late to the terminus. At the terminus, a second tram and driver are waiting. The driver gets the call and departs on time. When it reaches the struggling tram, the drivers swap and the tram making it to the terminus now becomes the new Block Car. It's brilliant in it's simplicity and when employed properly, can be wonderful.
Several problems arise here. First, it's difficult to have a tram sitting with a driver at the end of the line when there's often a shortage of trams in the first place (almost every depot is calibrated so that during the peaks the sheds are empty). Secondly, paying a driver to sit at the terminus can often be more expensive that short shunting, especially if everything runs smoothly (which it does often enough). Like Metro, we don't have access to a whole bunch of staff and vehicles at the faint smell of problems. Years of private running have ensured that any "fat" has been well and truly trimmed and any flexibility thoroughly amputated.

Posted by Melbourne Tram Driver at 4:07 AM